Are you awesome? If you found this article useful, spread the word! :)

Just to let you know, this website uses a couple of cookies...no biggy Continue Find out more

And I'll send you Free stock images every week! 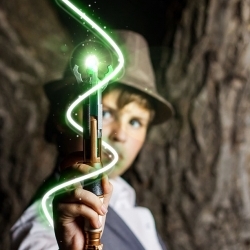 In this tutorial, I will teach you how to add a light beam glowing effect in Photoshop using paths, a normal brush, filters and layer styles. You are going to learn different techniques which can be applied to other images and helps you get a grasp on the dreaded Pen Tool and how different blending modes affect how the layers appear and interact with other.

If you have any questions, use the comment section and I’ll get back to you. Let’s get started! 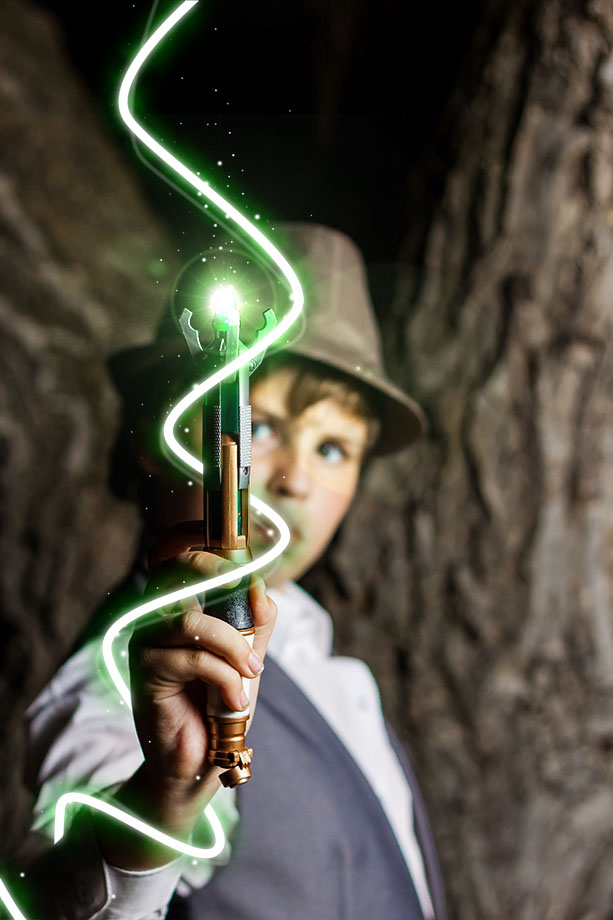 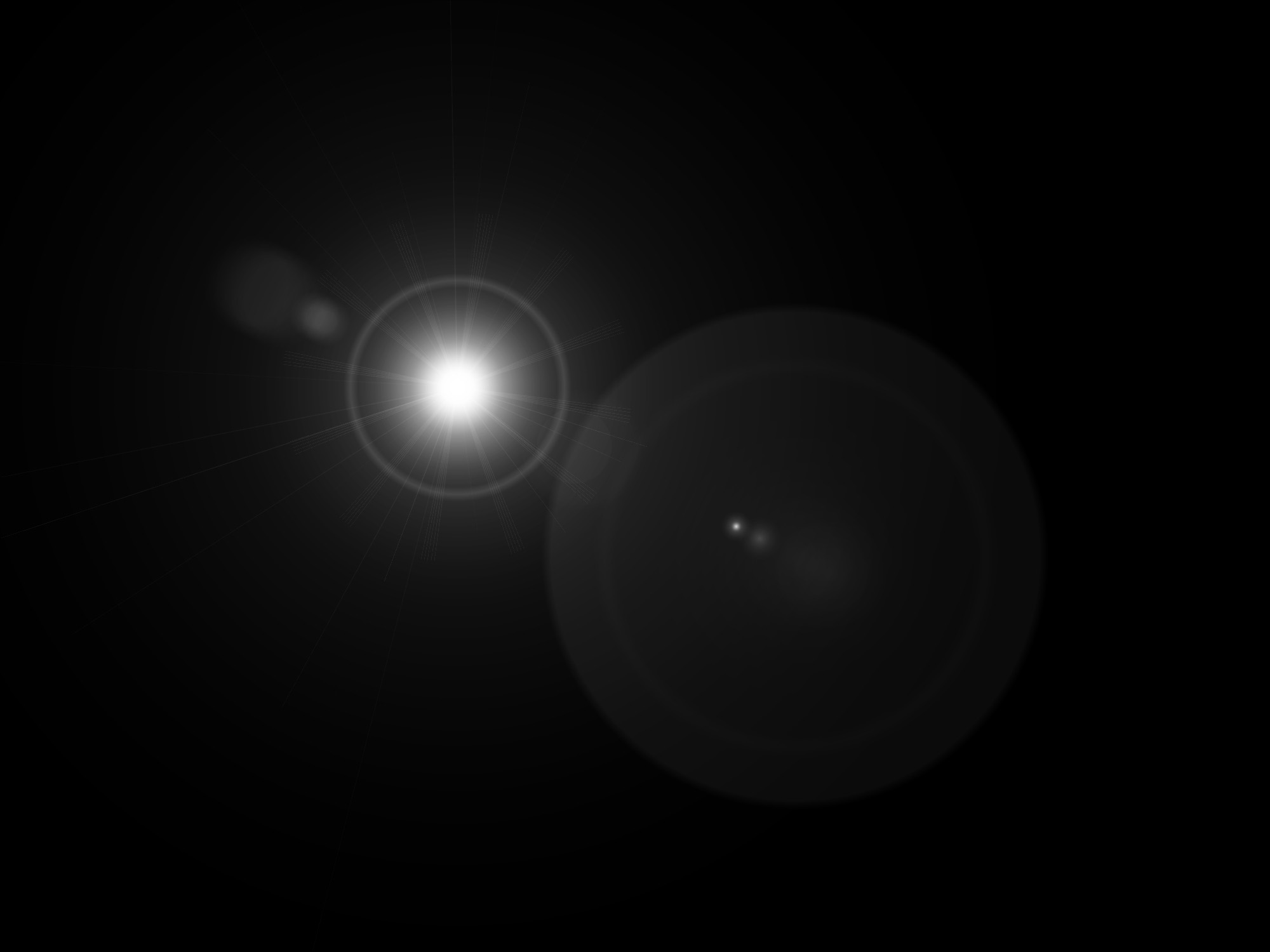 Open up your image in photoshop 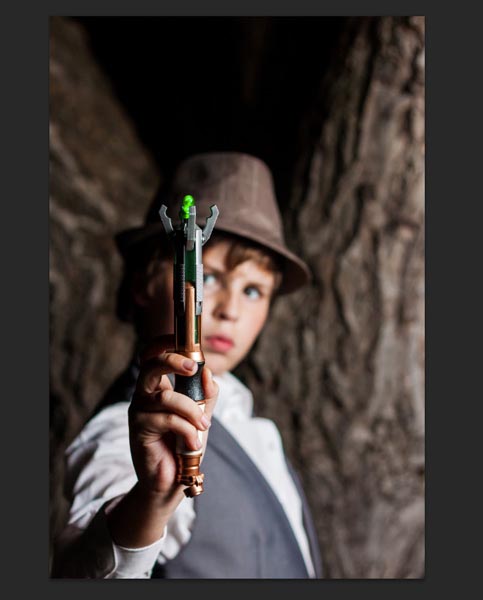 Decide how you want to shape you swirl around your image, select your Brush Tool (b) with a white foreground selected as a colour with 100% opacity, hardness and flow (we'll soften it later) choose the brush size you would like.

Using the  pen tool (p) (which takes some practise if you're not used to it so don't get too frustrated) draw out you path for your swirl, clicking and holding on each anchor point then dragging to create an smooth curve.

Tip: you can use the Direct Selection Tool (a) to fine-tune your path afterwards. 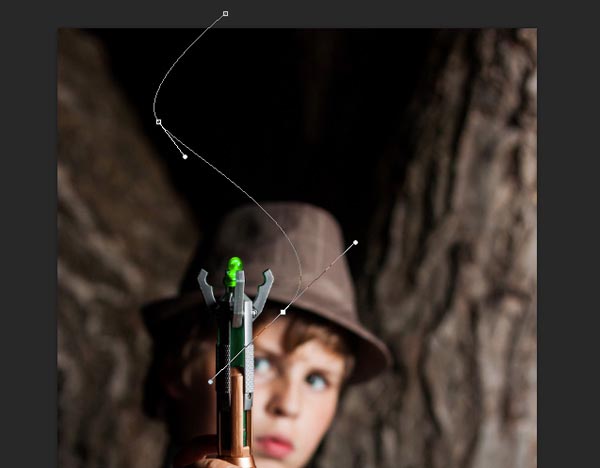 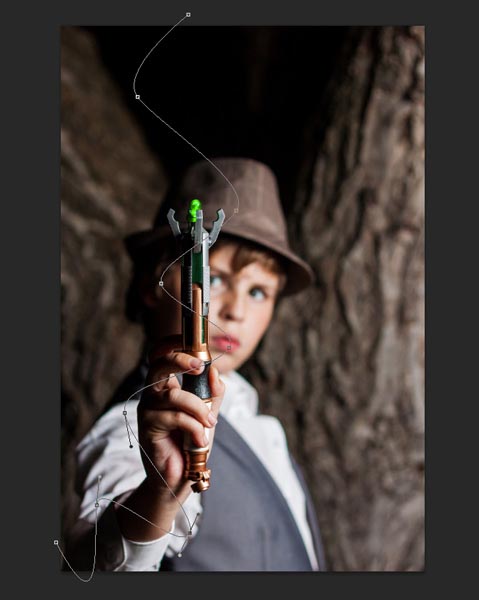 Create and select a new layer over your background image (name it something like 'main stroke') and with the Pen Tool (p) selected, right click on your image and choose 'Stroke Path…'. 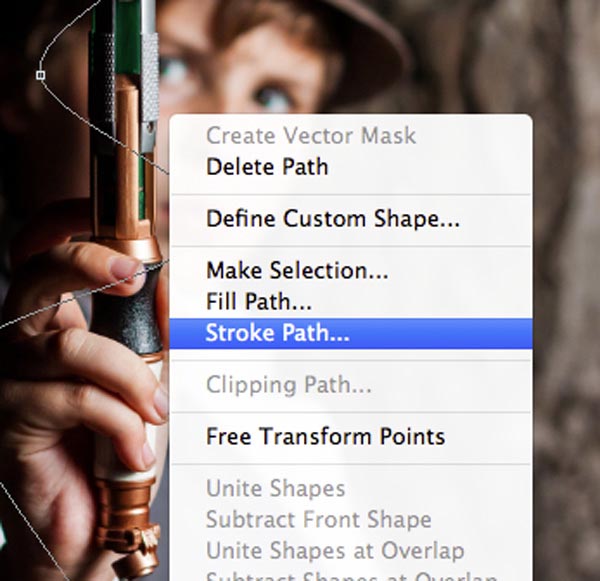 On the stroke path menu, select Brush (which we have pre-defined in step 2) and optionally you can simulate pressure to thin the line at each end.

Now you have a nice stroked line over your image... which looks like something you could've done in Paint, wait for it… 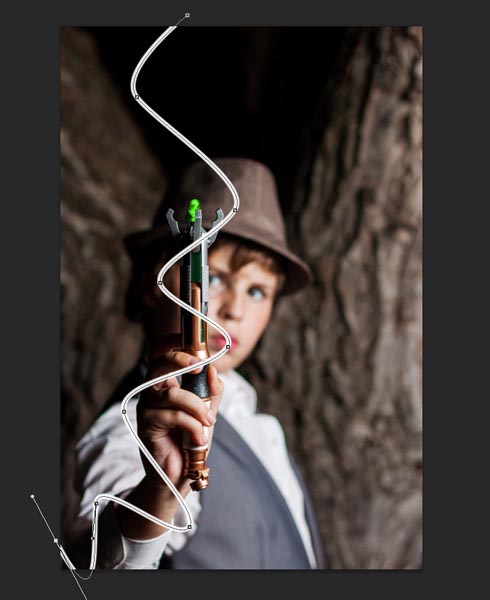 Create a Layer Mask for the stroke layer by selecting the layer and clicking the layer mask button (show below).

Tip: You could use the Eraser for this next step, but I think it's a good habit to use layer masks as they are non-destructive to the layers, plus you don't wear out Cmd/ Ctrl + Z! 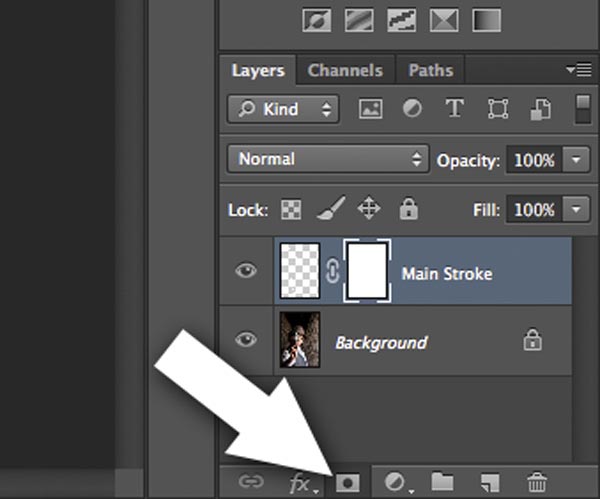 Now we're going to rub out the sections of the stroke which appear behind the arm in the image. Look at your image carefully and decide which the best sections will be to rub out.

Choose your Brush Tool (b) and black as the foreground colour, with a slightly soft brush, select your layer mask on the stroke layer a start 'Erasing' the stroke, like so… 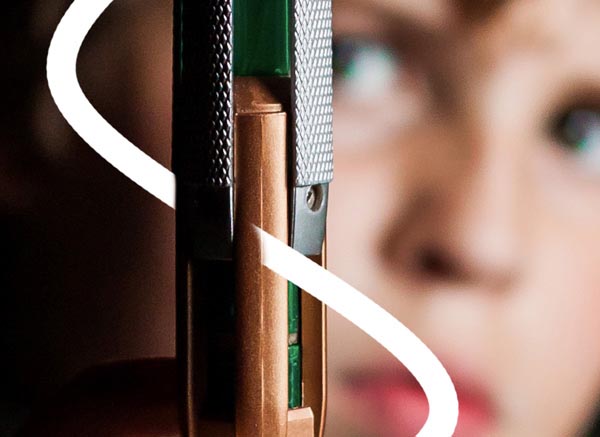 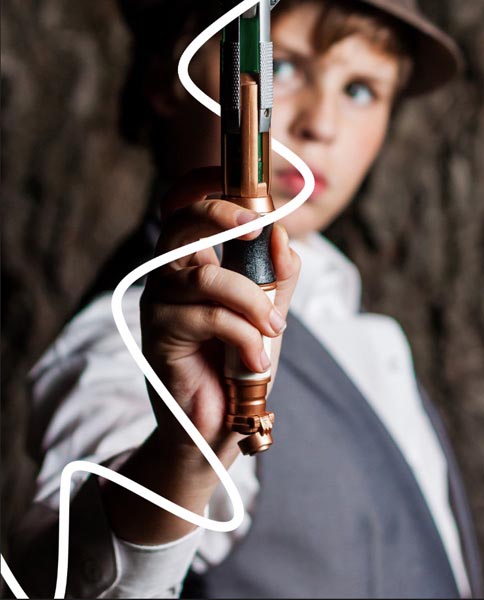 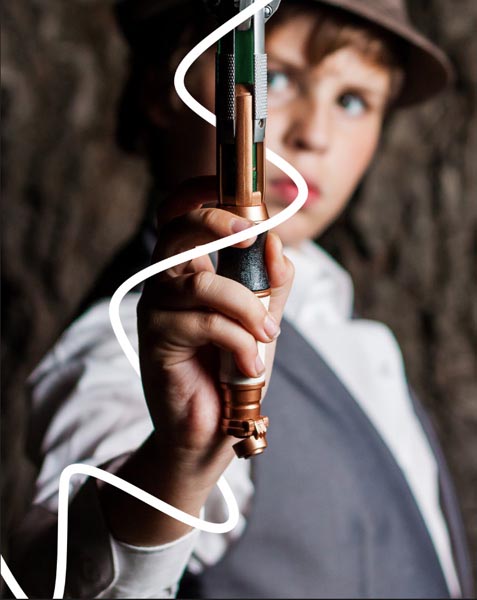 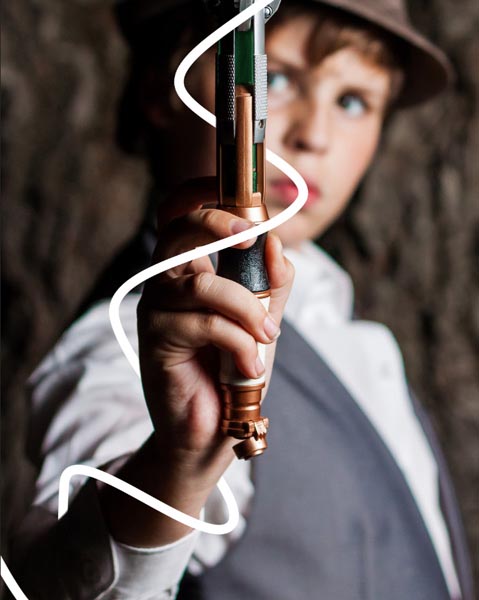 Great, actually starting to look a little more like it's part of the image!

Next duplicate your stroke twice by Right Clicking > Duplicate Layer… OR Cmd/ Ctrl + J if you're feeling fancy!

Rename the middle stroke to 'stroke glow' and the lower to 'textured glow'. 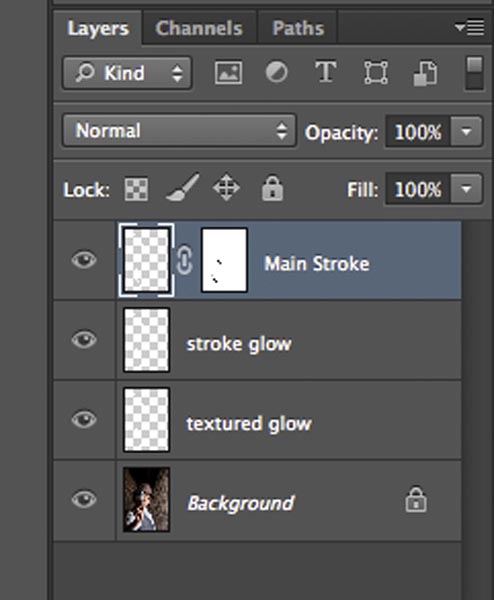 Select the 'stroke glow' layer then go to Filter > Blur > Gaussian Blur, about 20 Pixels worked for me.

Don't worry about the glow 'leaking' over the areas a little where we rubbed out, this would normally be lit up by the 'light beam' anyway. 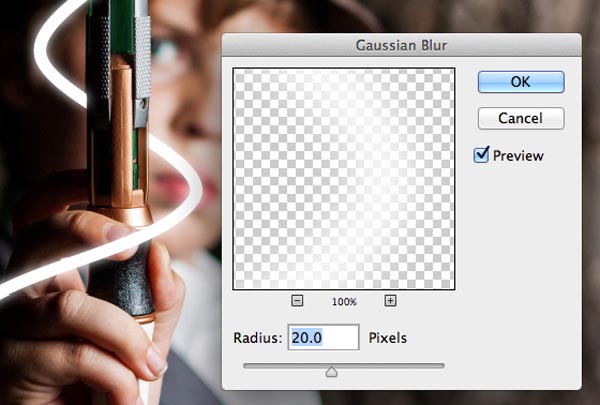 Now we're going to add a bit of colour…. finally!! Hide the two top layers and create a new layer above the 'textured glow'. Right click > 'Create a Clipping Mask' with it, then bucket fill the layer with whatever the hell colour you like! I chose green. 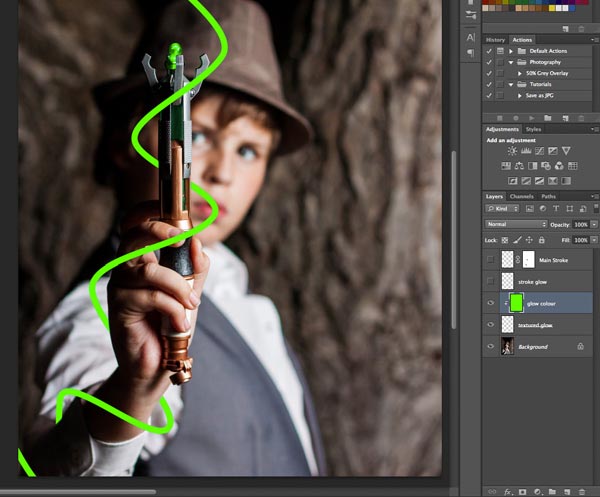 Now we're going to Gaussian Blur the 'textured glow' layer which should give us a nice big coloured glow. Duplicate the layer then merge them together to add a bit of extra intensity, then reduce the opacity a little as needed. 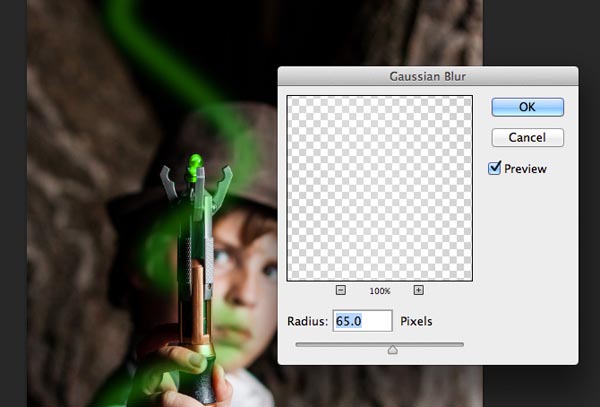 Now for a bit of texture! Make a new Clipping Mask layer above the glow colour one.

Call it, I dunno… texture? Change the Blend Mode to 'Multiply', then go to Filter > Render > Clouds. 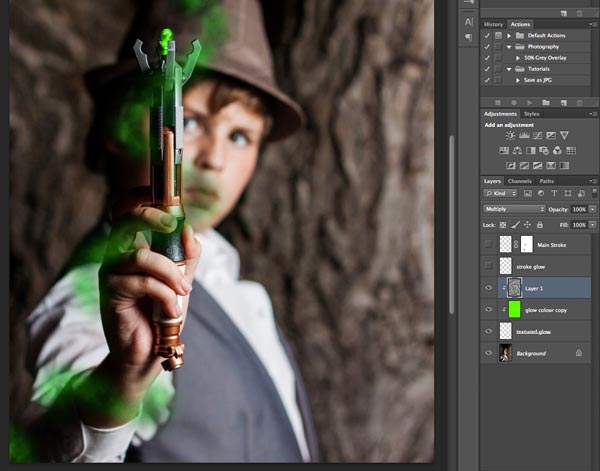 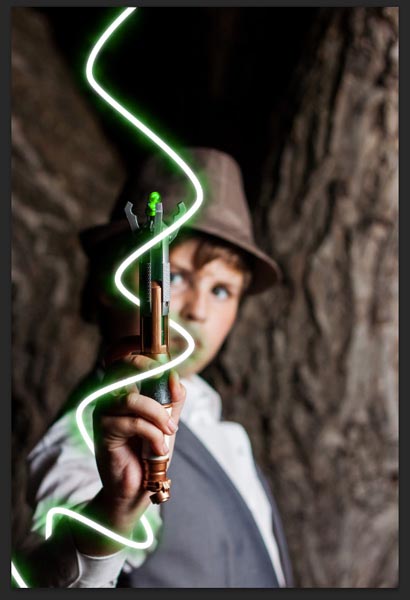 Next we're going to add a second, smaller stroke going up the arm. So choose a hard brush smaller than the original stroke and again select a white foreground. With the Pen Tool (P) follow a similar path to the original but slightly off. 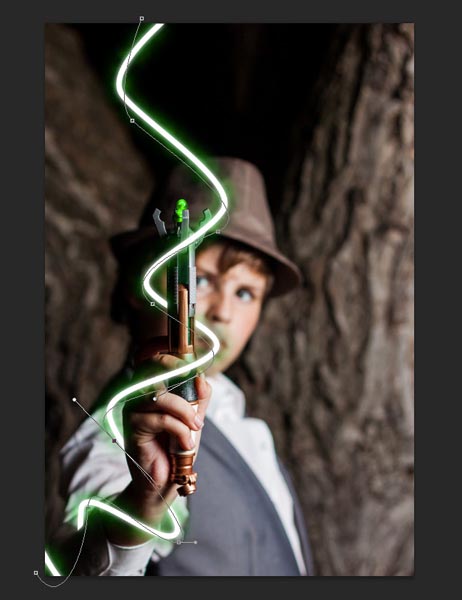 Make a new layer (small stroke) on top of everything and Right Click > Stroke path. 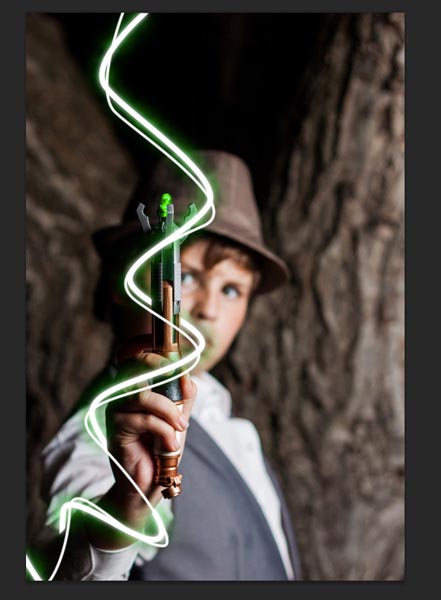 Add a slight Gaussian Blur to the smaller stroke. 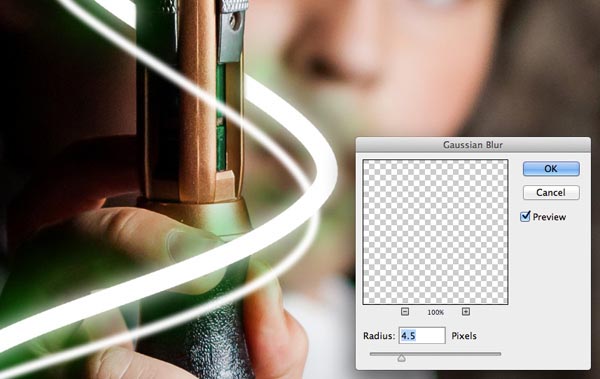 Create a Layer Mask on the smaller stroke and brush out with black, the areas where it goes behind in the image. Then drop the opacity of the layer to around 20%.

Now we're need some light speckles to add a bit more depth and magic to the image.

Then start clicking single dots on the image changing brush size, Mine ranged from 4-30 Pixels. 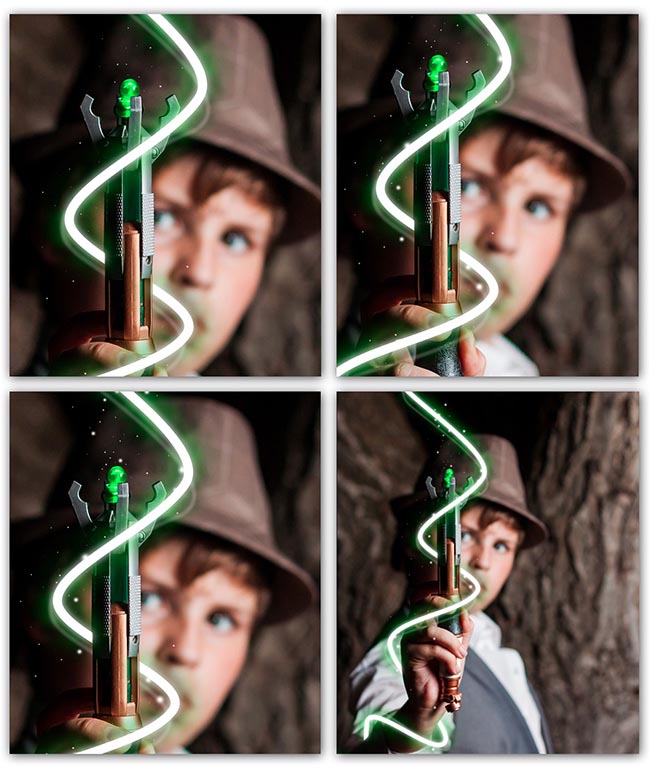 Now we add a lens flare to the main source of light, in my case coming from the tip of the sonic screwdriver.

Grab the Lens-Flare.jpg image below, go to File > Place... then size and position the image in place.

Then change the Blending Mode to 'Linear Dodge (Add)' and drop the opacity of the layer to 90%.

Next, Add an adjustment layer, Layer > New Adjustment Layer > Hue / Saturation, and Colorize the layer to the desired tone, these are my settings...

Note: Be sure the clipping mask and colorize buttons are checked. 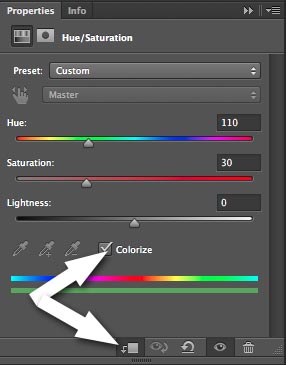 Now you should have a nifty looking lens flare! 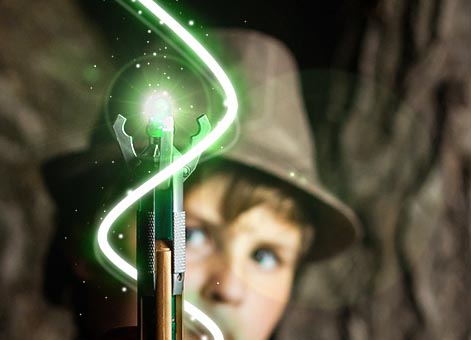 Lastly, as the colour I've used is completely different to what was used in the original image, we need it to look like the colour glow is actually there. So create a new adjustment Layer just above the background image, Layer > New Adjustment Layer > Hue / Saturation. 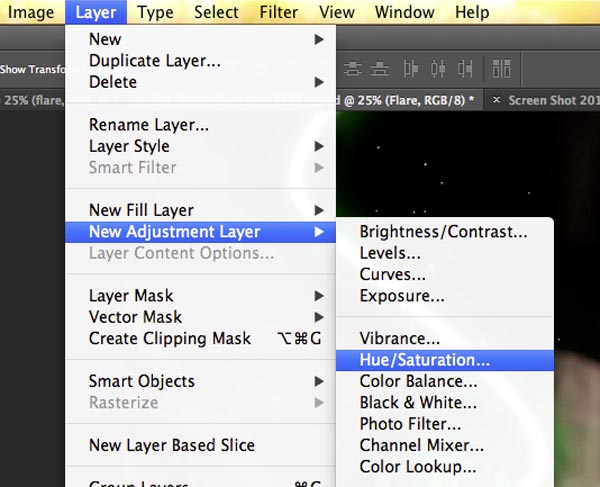 You will have to play with the settings a little to match your image but as mine needed more green and a little extra saturation, these were my settings… 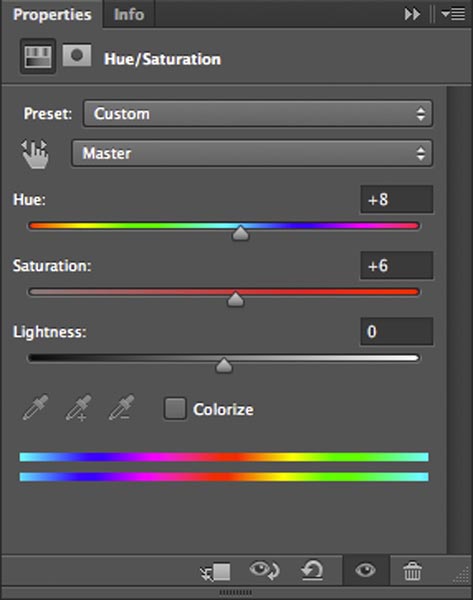 So there are a lot of different versions of the 'Neon Glow' technique around, but I personally think it works better with a few extra touches, like the second smaller stroke and the small light speckles and lens flare, adding a little extra depth and interest. Also a relevant image such as this with a sci-fi theme and a transitive light source in the picture really ties it together.

Hope you have found this tutorial useful! Any questions or thoughts you may have, please use the comment section below.

And I'll send you Free stock images every week!